That Cambodia (and Phnom Penh in particular) has been struggling with increasing traffic for quite a while would surprise no one, what with it catching up with neighbouring countries and the healthy economic growth. Mix this with the prestige given to car-ownership and one would understand why during rush-hour your journey takes longer and longer.

What does surprise, is the complete ignorance shown by authorities in addressing this, at least that's what you would come to believe. Then again there's this:

The governor said 22 buses donated by the Japan International Cooperation Agency (JICA) will ply the city's two main boulevards.
The scheme also entails banning motorcycle taxis and three-wheeled cycles from using these boulevards, a move which has enraged drivers of the vehicles, who stand to lose income'.

For many, this would show how serious authorities are in addressing concerns of keeping traffic flowing while simultaneously providing cheaper transport. The problem though is that this article excerpt dates from 2001! 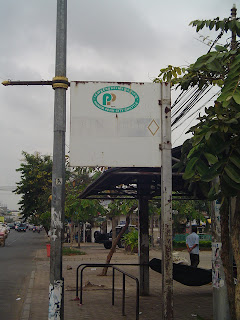 Phnom Penh City (defunct) Bus System: a bus stop to oblivion
Apparently, it fell through and seven years on the problems are the same, as are the solutions, however authorities fail to accept measures and simultaneously follow through on these. Take for instance the decree that large buses were to banned from the city center; it worked for a week, but nowadays there are simply more (and larger) buses picking up their passengers in Phnom Penh city center.

Though not publicly admitting to their lack of addressing the problem and enforcing it, one simply has to notice how the city authorities are increasingly turning to low-cost technocratic measures as an admittance of their incompetency. Keeping the rush hour traffic flowing can be achieved by widening the roads, a meter here, a meter there and new sets of traffic lights. 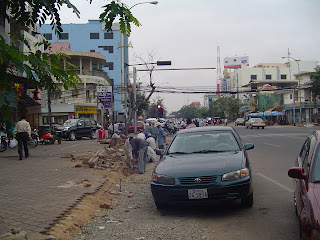 Widening Sihanouk; will it ensure free traffic flow, especially if the bottle necks are elsewhere?
Both measures are just stop-gap measures, widening the streets fails to keep up with traffic growth and is already nearing it's maximum limits (Monivong city center) and stop lights, well they are a story apart. Adhering to lights for instance is poor and installation of lights often leads to more rush hour problems, witness for instance Monireth and 271.
What we here at Crossing Cambodia fail to understand, is how Cambodia fails to learn lessons from it's neighbours. Take Vietnam, grappling with the same problems:

Now why can't Cambodia authorities think in the same league?
Posted by Jhdubbeldam at 8:40 am

Linking to Cambodia's no. 1 up to date travel information

A link to the sites on Cambodian traffic (safety)

Cambodian Traffic Law and you